On a beautiful late July evening, Flicker Alley had the great privilege of attending Silent Salon, a showcase of silent comedies co-presented by Villa Aurora Los Angeles and The Academy of Motion Picture Arts and Sciences. All four screenings in the series are held at Villa Aurora, an artists residence in Pacific Palisades.

Nestled on top of a hill with charming Spanish-style architecture, it feels like you are stepping into a new world or a different era upon entering the Villa, thus, somehow rendering it a perfect spot to enjoy silent cinema. 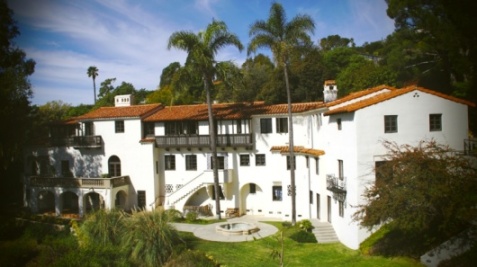 The July 27 program featured films starring Max Linder, the French comedian who  influenced Chaplin, Lloyd, and Keaton.  He starred in numerous Pre-World War I comedies as ‘Max,’ a mustached, top-hatted dandy.  In 1912, Linder was the highest paid film star in the world, and it is not hard to see how he achieved this feat once you see him on the big screen. His charmistatic persona shone in the films we watched, including ‘Max Takes a Picture’ (1913), ‘Love’s Surprises’ (1915), ‘Troubles of a Glass Widower’ (1912), and ‘Max Sets the Style’ (1914). We especially enjoyed the excerpt from ‘Be My Wife’ (1921), in which Linder stages an elaborate, fake fight with himself to appear like a valient hero to his object of affection and her miserly aunt. To top it off, Dean Mora’s live accompaniment on the Villa’s newly restored pipe organ was a delightful treat.

Don’t fret if you missed this wonderful program of Linder films — there are two upcoming Silent Salon screenings. The program on August 10 will show four comedies starring Harold Lloyd. The final program of the summer is on August 24 and will feature four early Keystone comedies starring Charlie Chaplin. Don’t miss these very special events! And bring a blanket and picnic to enjoy in the gardens before the projector gets rolling!