Factual Lies: My Thoughts on Nanook of the North

We’re pleased to welcome a guest blog post from Nathaniel Sutton. He’s currently a film student at Cal State Northridge, an intern at Flicker Alley, and, not to mention, a film fanatic.

It is my senior year of college, and I am a film major, and immense film buff. This area of study mainly consists of production work, but occasionally I revel in the chance to study film theory. Which is why I jumped at the opportunity to enter Documentary Tradition 416, and learn about a genre that is somewhat foreign to me. My first day of class however, I looked upon the syllabus to discover our first film is Robert J. Flaherty’s Nanook of the North. I mean, how can you study film and not have at least heard of this movie? The first true documentary ever presented to the public. A film of wonder, heart, substance, adventure, and mystery. It really is a classic and I expected a class of thirty devoted film fanatics like myself to feel the same way. But then the professor asked the question that is normally asked before any screening, “Has anyone seen this?” I, of course, raise my hand, then foolishly look behind me to see that I was a man alone. Not one student had viewed this masterpiece of first achievements. Then the professor asked me a question that does not normally get asked before a screening, and one that still has me scratching my head: “Why?” Why have I seen this film? Really? We are sitting in a class about the history and art of the documentary film and you ask me why I’ve seen it? The only answer I could think of in a moment’s notice was, “I was interested?” 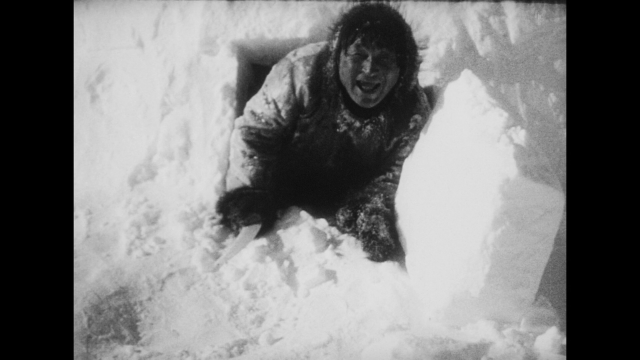 Nanook and his igloo

She plays the film, and surprisingly the class enjoys it, though they could feel the forced nature of some scenes, but that is to be expected. Technically, it’s what the film thrives on. But I still couldn’t get over the professor’s preposterous question. Or was it preposterous? What is it about this film that drew me in? And why would I revisit it again? These questions filter down to a single, simple conundrum: What is it about Nanook of the North that we enjoy? I think it has to do with its connection to our own lives and families. The family we witness on screen may be of a different continent, culture and way of life, but within that framework remain fundamentals that anyone can see reflected in their own experience. Stripped to its core, this family cares, loves, travels, feasts, entertains, and provides for one another. Hints of our more average existence are cleverly woven into the story-line, all thanks to the genius of Robert J. Flaherty. This is one of the main reasons the film is so successful. We see fascinating, foreign images, yet deep inside, Nanook’s family is not so different from my own. A father builds a house for his family, he provides them with food, he teaches and prepares his young. All the same stories of our lives, just set in the endless tundra of the far north. 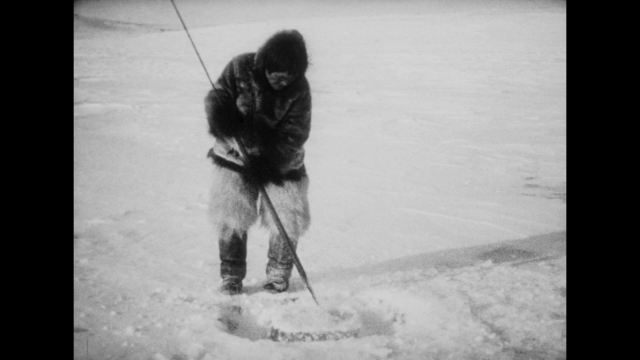 Hunting in the Arctic

Yet this film provides us with as many lies as it does heart. We have all heard the stories, but for those who haven’t, here is a refresher: the original film Flaherty set out to make was destroyed in an accidental fire, forcing the filmmaker to practically start from scratch, but with the intent to persuade and entertain. Flaherty would do anything, even put his subjects in harm’s way, in order to tell his story. But Nanook would always go along with it, for he was equally as invested in the film. Many of the scenes and actions were staged including the notably famous igloo scene, which had to be built twice its normal size in order to secure the camera and equipment. These staged events and structural lies that the film presents us with, take away from the documentary feel, yet ultimately create the classic text we know today. The filmmaker is always at the helm when producing a product, whether it is fact or fiction, and therein lies the brilliance of Flaherty. He was one of the first to realize that so-called factual events could indeed be edited like the popular fiction films of the time. With that in mind, he created great moments of tenderness and suspense when perhaps, in reality, there were none.

This and many other reasons (the barter scene, the walrus hunt, etc.) are why I immensely enjoy this film. But, to pinpoint why I watched it in the first place? I would say my first answer would be just as good as any: I was interested. In fact I still am, with every new viewing, whether in front of a classroom of thirty, or sitting on my couch in the dark. I am always engaged by Flaherty’s beautiful lies.

Thanks so much, Nate! Nanook of the North (plus The Wedding of Palo & other films of Arctic life) is available in a 2-Disc Blu-ray Deluxe Edition.

This entry was posted in Highlights and tagged documentary, Flaherty, Nanook of the North, Robert J. Flaherty, silent film. Bookmark the permalink.

2 Responses to Factual Lies: My Thoughts on Nanook of the North